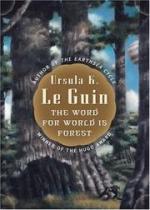 The Word for World is Forest

Centuries in the future, Terrans have established a logging colony & military base named “New Tahiti” on a tree-covered planet whose small, green-furred, big-eyed inhabitants have a culture centered on lucid dreaming. Terran greed spirals around native innocence & wisdom, overturning the ancient society.

Humans have learned interstellar travel from the Hainish (the origin-planet of all humanoid races, including Athsheans). Various planets have been expanding independently, but during the novel it’s learned that the League of All Worlds has been formed. News arrives via an ansible, a new discovery. Previously they had been cut off, 27 light years from home.

The story occurs after The Dispossessed, where both the ansible & the League of Worlds are unrealised. Also well before Planet of Exile, where human settlers have learned to coexist. The 24th century has been suggested.

Terran colonists take over the planet locals call Athshe, meaning “forest,” rather than “dirt,” like their home planet Terra. They follow the 19th century model of colonization: felling trees, planting farms, digging mines & enslaving indigenous peoples. The natives are unequipped to comprehend this. They’re a subsistence race who rely on the forests & have no cultural precedent for tyranny, slavery or war. The invaders take their land without resistance until one fatal act sets rebellion in motion & changes the people of both worlds forever.

Reviews and ratings on The StoryGraph and Anobii.

If the details of this book are incorrect you can update Open Library's information about "The Word for World is Forest".

Buying options in the US

Not in the US? Choose a different country for more relevant buying options.

Copies of this book

We also searched Better World Books for this book but they don't appear to have it available for sale.

We are temporarily unable to search Bookshop and ThriftBooks for this book due to technical issues.

Other options for buying this book

You could also try these book sellers who all accept online orders and deliver nationwide:

Your local bookshop can probably order this book for you if you contact them. Indie Bound's local independent bookshop search can help you find a bookshop near you.

If you spot any incorrect information about copies of books on this page, please let me know via email at [email protected] or on twitter @EthicalBookSrch and help improve future listings.